Supporters of HB 2107 and SB 269 call on Public Health Chairman Four Price and Health and Human Services Chairman Charles Schwertner to schedule hearings on the bills, which would fix the currently unworkable Texas Compassionate Use Program and make it more inclusive

AUSTIN, Texas — A group of patients, caregivers, and medical professionals gathered at the Texas State Capitol on Tuesday to urge lawmakers to allow hearings on critical medical marijuana legislation.

Statement from Amanda Berard, a pediatric nurse and veteran with PTSD who resides in San Antonio:

“Since concluding my service to the U.S. Army, I’ve cared for and treated children with special needs, and I’ve seen what traditional medicines can do to their already struggling bodies and ability to develop cognitively. Children in other states are given an opportunity to thrive with the use of cannabis, which is often a safer and more effective medication.”

Statement from Amy Fawell, an Austin mother of a child with autism:

“My son lives with severe autism and traditional medications have simply not provided the kind of relief he needs to control his aggressive and self-injurious behavior. Medical cannabis is helping families in other states, and we’re desperate to see if it could help our sweet boy.”

“Patients in most states are allowed to access medical cannabis when their physicians feel it is medically indicated. If it were legal and accessible in Texas, many of my patients, such as those battling cancer, could benefit from this medicine.”

Statement from Cherie Rineker, a terminal cancer patient who resides in Lake Jackson:

“Opponents of this bill are trying to claim the moral high ground by saying they want to prevent drug abuse. There is no morality in keeping medicine from sick and dying patients who can benefit from medical cannabis.” 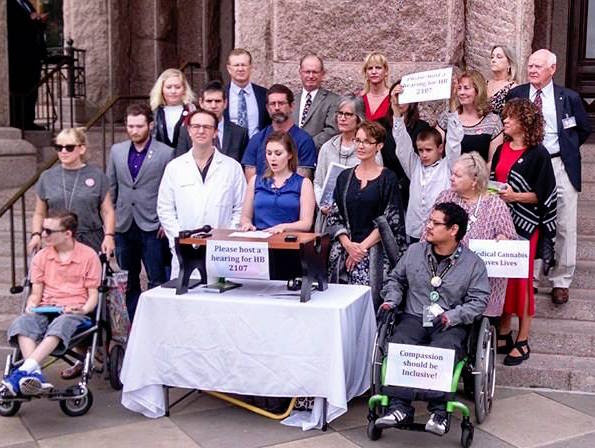